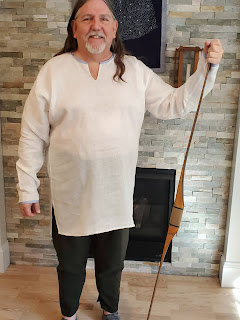 For the Calontir Clothing Challenge, we are making a complete set of clothes for an 11th Century Anglo Saxon man and his wife.  The innermost layer consists of a Scyrte (shirt) and Braccas (trousers) for the man, and a Smoc (smock) and Feax Clap (cap) for the woman. Scyrte  (shirt)  The Scyrte was made with a rectangular construction in the body.  There were square gussets under the sleeves and a slit at the bottom.   A round keyhole neck opening was bound with silk ribbon in a pale blue. It was made of a lightweight white linen, hand sewn with a waxed linen thread.  Seams were sewn with a backstitch, and flat felled to finish. Smoc (smock)  Similar in construction to the Scyrte, the Smoc has triangular side gores and is ankle length. Feax-Clap (head cloth or cap)  The cap that is worn under a veil.  This was made in a style sometimes known as an English cap.  It is larger and longer than similar scandinavian caps, and is designed to cover the hair and give a surface to pin the hair o
Post a Comment
Read more 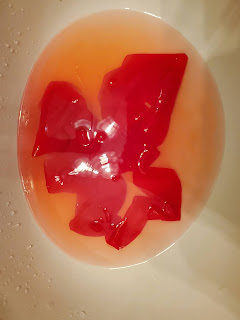 One of the nice things about the time allowed for the Calontir Clothing Challenge is that it is long enough to take your time, to really do things properly.  I took a break today from sewing the first layer to continue preparing the materials we need for the other layers.   Here are the steps we are taking: 1.  Wash the fabrics . You don't want surprises after you finish your project.     Linen needs to be washed and dried in a machine to shrink it as much as possible before sewing.         Wool will felt if it is too hot or too agitated.  Wash on delicate cycle and air dry.     Silk bleeds dyes very easily.  Wash by hand in cool water with a gentle cleanser.  Air dry. 2. Iron the fabrics .  This is a step I often skipped in the past.  It really helps to do this.     Linen needs a hot iron with lots of steam to knock down all of the wrinkles.           Wool needs a cooler iron with a little steam. Washing roughs up the surface, so you want to smooth down   the fibers again.
Post a Comment
Read more 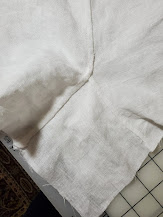 It's funny how you can do something many times, and still learn more.  When you first start in the SCA, there are two basic ways you are taught to make a tunic with sleeve gussets. The first one is to sew the square gusset to the side of the sleeve, then sew the sleeve to the body of the tunic.  Then you sew the side seams, somehow managing to sew the other three sides of the gusset.  Because this is frustrating, the second way is to split the gusset into 2 triangles.  The side seams are now easy, but you have a seam in the middle of the gusset, which defeats some of the purpose of it in the first place. The problem with both of these methods is that it assumes that you are using a sewing machine.  If you are constructing the garment by hand, gussets are no problem whatsoever. 1.  Sew the gusset to one side of the sleeve. 2.  Sew the gusset to the other side of the sleeve and sew the rest of the sleeve seam. 3.  Finish all of the seams on the sleeve now.  It is much easier than af
Post a Comment
Read more

October 02, 2020
We are getting ready to begin our Anglo Saxon projects, and I am working on mock-ups. But we are making tunics!  And I have made many tunics before!  Hmm.  Tunics are one of the first things that most people make when they start in the SCA, and most people move on to other types of clothes fairly quickly.  Why? Because tunics are easy to make, but tough to make look good.  It is all too easy to resemble a sack of potatoes.  I have made many other types of historical costume, and I prefer fitting clothing that fits closer to the body.  It is easier to make small adjustments while fitting it on a person, and change the way a garment fits.  When you are dealing with clothing that is draped on the body, you actually have to make much larger changes to make the garment fit better.  I have found I love the earlier time periods the best, so tunics it is. The way a tunic fits is based foremost on the width of the shoulders.  This determines how wide the central panel of the tunic is for the c
Post a Comment
Read more

The "Must do" list for the Calontir Clothing Challenge 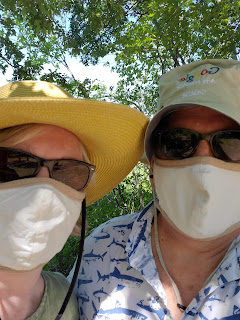 Linnet is one of those SCA seamstresses that undertakes making a new outfit for each of us in the month before an important event.  As the depth of our research has begun to focus more the mid 11th century in Essex (since Errol Flynn isn't really the right time period) we are going to use the Calontir Clothing Challenge (CCC)  to create historically correct  outfits for each of us.  CCC requires four layers of entries consisting of "under layer", "top layer", "outer layer", and "accessory layer".  Our garb projects in the past have focused on the pretty thing one wears that everyone can see, the 11th century tunic, the upper middle class 16th century gown with a doublet, or the Italian ren gown.  While making the inner layer, Linnet would create the correct piece but didn't spend nearly the same time in its embellishment.    This challenge is to create the same level of "wow" in every layer. So what are we going to include in ou
Post a Comment
Read more

No Extant Example, No Problem?

September 25, 2020
How do you make something that doesn't have a pattern or an extant example?  Illuminations, religious iconography, historically similar pieces, and Owen-Crocker's best guess. We are in the week before the Calontir Clothing Challenge begins.  During this "pre-season" we are allowed to get fabric, prepare patterns, mock-up sample pieces, and plan, plan some more and do some research to give structure to our plans.  Most of our pieces of clothing and accessories are supported from sources or exemplars that are from the mid eleventh century.  The one piece of our project without a lot of historical guidance is the mantle, an over layer worn by upper class Anglo Saxon women in the mid 11th century.  The mantle is belted in the front and hangs a bit higher in the front than the back.  From period illuminations, it appears that the front of the belted mantle is about knee length.   Owen-Crocker writes that the mantle was a rectangular or oval garment with a hole for the head
Post a Comment
Read more

September 22, 2020
In the beginning,  Let me introduce myself, It was a dark and stormy night, There is no exceptionally exciting way to begin a blog other than to make sure you end up with an insight into what lies behind this first post. I wish I knew!  This blog starts with a pair of somewhat hammer hardened SCA * members with years of finding shiny things and then finding newer shiny things and then being challenged by life to find the smallest snippets of time to practice anything at all.  Well, during the year we will all remember, time seems to be the one thing we have lots of, so, here we are: a blog about crafting in the SCA.  This will include arts and sciences because both of us were science nerds by vocation and artistic crafters by avocation. The first project we will follow is an entry for the Calontir Clothing Challenge.  Linnet is the seamstress, Kendrick is the support team.  Linnet can take it from here! *For those of you who found your way here but don't know the SCA, the Society
Post a Comment
Read more